For Many on Puerto Rico, the Most Coveted Item is a Plane Ticket Out – Exodus to the states after Hurricane Maria

Posted on October 23, 2017 by puertoriconewcomer

SAN JUAN, P.R. — On a hurricane-battered island where people may still wait hours for gasoline, cash and ice, one of the scarcest, most precious commodities has become a plane ticket out.

Two weeks after Hurricane Maria, thousands of Puerto Ricans are cramming onto the small number of scheduled flights and charter jets and are fleeing for the mainland United States, rather than endure months more without power, cellphone service or regular running water.

“Nothing is beautiful anymore,” said Glenda Gomez, 31, who is planning to leave for Miami on Friday with her three children.

So people are selling their cars, abandoning wrecked houses and leaving their property in the hands of relatives who are staying behind. Some expect to return after a few months on the mainland; others say they are going for good.

Puerto Rican airports have become scenes of tearful goodbyes as families send their children, spouses and parents to live with relatives in Orlando, New York, Washington — wherever.

On the mainland, cities and states with large Puerto Rican populations are preparing for the influx by trying to help people find housing, work and schools. Florida alone — already home to 1 million Puerto Ricans — anticipates as many as 100,000 arrivals to the Orlando and the -Tampa Bay area.

In the two weeks since the storm gutted Ms. Gomez’s home on the eastern coast of Puerto Rico and ruined her dreams of renting rooms to tourists, Ms. Gomez said, her family has been surviving on canned food and boxed milk, paid for with the only cash they had on hand — her three children’s private-school fees. Her husband has been waiting in line for hours to buy fuel for their generator. She has been making two-hour trips to buy groceries from a swampy supermarket. Finally, she decided: Enough.

Relatives in Miami offered to buy plane tickets for her and the children, and Ms. Gomez made plans to use the last few gallons of gasoline in her car — it was just enough for the drive to the San Juan International Airport.

Puerto Ricans have streamed off the island for so many decades and in such numbers that migration is woven into Puerto Rico’s identity and culture. One aching anthem pines that “I’m leaving, but one day I’ll return to find my love, to dream again, in my Old San Juan.”

Now, the exodus of families like the Gomezes is accelerating a decade-long slump in population that has seen Puerto Rico lose about 400,000 people during a period of economic strain. Experts say the new wave of migration raises concerns about who will be left to rebuild the island’s shattered infrastructure, and how an economy suffocated by $73 billion in debt and 10 percent unemployment will rebound if tens of thousands more residents suddenly leave.

“It’s going to be a stampede,” said Jorge Duany, a professor at Florida International University who studies migration to and from the island — and has left the island himself. “I thought I’d go back and retire. But now it looks like it’s going to take a little longer.” 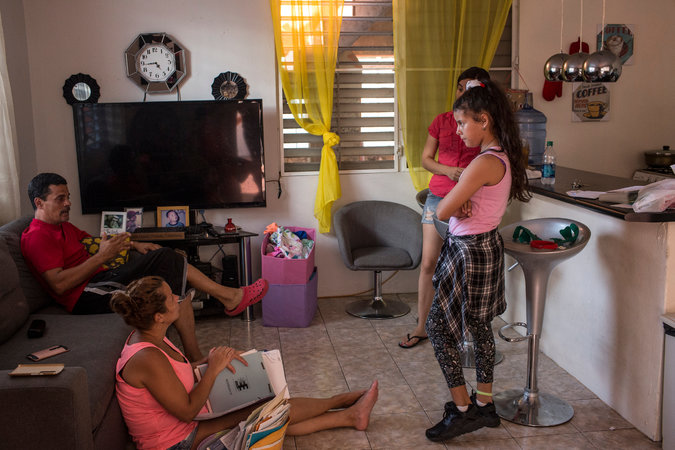 Raymond Ortiz, left, his wife Maria Guadalupe, center, and their daughter Mia, 11, in their home in San Juan. The family is moving to Rocky Mount, N.C., so the children can attend school and the parents can find jobs to replace those they lost to the hurricane. Credit Kirsten Luce for The New York Times

Mr. Duany said it was too early to say how many were migrating on the packed planes leaving San Juan, or how many might boomerang back if Puerto Rico heals and life eases back to normal sooner than expected.

Working-age adults made up the bulk of migrants over the past decade, Mr. Duany said, but this storm has prompted many families to put older relatives and children onto planes, to ensure that they get necessary medical care or to salvage something of the school year.

In interviews across the island and in packed airport departures halls, people said they were already registering their children for school in Orlando, Charlotte or New York. They are starting to line up jobs and apartments with relatives across the country.

Nancy Santos, 58, who was waiting in an ice line in Ponce last week, said she plans to leave as soon as possible with her daughter and three grandchildren. They will join family in Connecticut at least until Christmas, while they wait for conditions to normalize in Puerto Rico. Once things settle down, she plans to return to Ponce to sell her cars and furniture and then leave for good.

“Everyone will leave — everyone,” she said. “Things are so bad here. Look at us, making lines in the middle of the night for two bags of ice that are half water.” She added: “I have to do it for the kids. I am not going to think about it twice.”

Nayda Dávila, a 69-year-old retired judicial worker, said she could not stop crying as she packed her only piece of luggage by candlelight earlier this week. Her daughter in Washington, D.C., bought her a one-way ticket to get out of her rural hometown of Salinas.

She locked up her home, left her three dogs with a close friend and said she will remain stateside with her daughter indefinitely. She said had never considered leaving her patria, her motherland, until now.
“At my age, how much longer do I have left?” Ms. Dávila said. “And this island won’t recover for much, much longer.”
Ms. Dávila was one of the 10 passengers waiting on Wednesday to board a humanitarian flight on a private jet departing from Isla Grande Airport, a small airfield next to the convention center in San Juan where hurricane relief efforts are headquartered.
“I’m a strong woman,” Ms. Dávila said, holding back tears as she stared at the runway. “But Maria defeated me.”
Many of the dozen waiting passengers were older or had medical conditions for which treatment was impeded by the storm.

Diana L. Caraballo said she can no longer get her cancer treatment in Puerto Rico because of the storm. She waited with her dog, Freddy, for a charter flight to Fort Lauderdale so that she can stay with her son in Vero Beach, Fla., and receive treatment there. Credit Kirsten Luce for The New York Times
Juan Delgado Torres, 75, was still recovering from a knee operation he had two months ago. Since Maria lashed the island, he hasn’t been able to get the medication he needs or a doctor to prescribe it. To get him stable care, his daughter in Philadelphia organized a way out of the island and offered him her home.
“I’m going one way, until things get better,” said Mr. Delgado, a retired office clerk. “It’s painful, I don’t want to do it, but I have to.”
The decision can be just as painful for the young.
Hurricane Maria’s winds blew away parts of Hacienda Don José, a popular tourist restaurant in Condado, and took José Manuel Ureña’s job as a cook with it. Left without a source of income, Mr. Ureña decided it was time to leave.
“I want a change,” said Mr. Ureña, sitting on the curb at Juan Ponce de León Avenue in Santurce, where residents gather at a popular Wifi spot, many to arrange a way out of the island. “I haven’t accomplished anything here,” he said.
On October 19, Mr. Ureña, 24, plans to board a flight to Newark where a friend, who is also leaving Puerto Rico, found him a job as a cook at a Thai restaurant. Mr. Ureña says he only knows “basic English,” but he’s migrating “with an open mind.”
“I feel nervous and scared,” he said. “As the day looms closer, the worse I feel.”
In Florida, Gov. Rick Scott declared a state of emergency on Monday for all 67 counties in the state, making it easier for the counties to house, educate and help Puerto Ricans by waiving regulations. The declaration could also attract more federal money to the state.

For more immediate help, the governor announced that Florida will set up three one-stop relief shopping centers inside airport terminals and the Port of Miami, where Puerto Ricans can seek assistance with jobs, education, housing and programs like Medicaid and food stamps.
But some families like the Ortizes have no idea exactly what awaits them when they step off the plane. Raymond Ortiz plans to put his teenage son and daughter on a plane on Sunday, to travel to his sister’s home in Rocky Mount, N.C. He and his wife will follow later. Mr. Ortiz, 50, was born in New York, but he has lived in Puerto Rico for 16 years, and his wife and children were born here.
He said he will probably do maintenance work, and his wife — an office assistant at a health agency — has a lead on a job at Dunkin’ Donuts. He said his wife is especially anxious because she speaks halting English and has lived only in Puerto Rico.
But the family looked at a satellite view of their new hometown on Google Maps, and Mr. Ortiz said he loved all the green he saw. The high school that his 16-year-old son will attend has two baseball diamonds — a dream for a player whose team has not had a practice or game since before the hurricane.

Mr. Ortiz had wanted to return to the mainland even before Maria, because he was fed up with the island’s schools, hospital system, politics and crime. The lingering mess created by the hurricane was the last straw for him. Still, he said he felt a twinge about leaving.
“I feel really at home here — more than those 35 years I lived in New York City,” he said. “I’m going to a place I’ve never been. I don’t know nobody. I don’t know the neighborhood. It’s like starting all over again.”