Posted on October 23, 2017 by puertoriconewcomer

SAN JUAN, P.R. — Like many other frivolous things on the island these days, the shiny motorcycles at the Planet Honda showroom have been pushed to the side.

In their place are dozens of folding chairs, and on Thursday morning, they were all filled with Puerto Ricans waiting to buy the most essential machines on the post-hurricane landscape: portable generators, to light their powerless homes.

María Aguilera, 57, a teacher, was waiting in the line that had formed outside the showroom Thursday morning. When the sun sets these days, she said, she relies on candles for light. And like everyone else in Puerto Rico — including Gov. Ricardo A. Rosselló — Ms. Aguilera said she had no idea when the power grid might be restored.

“From the things I’ve seen with the infrastructure,” she said, “it could be months.”

Hurricane Maria’s near total destruction of the commonwealth’s electric power grid has transformed Puerto Rico into Generator Island. Running on gas or diesel, and ranging from lawn mower to moving-truck size, the generators are the only option for the roughly 90 percent of the island that has no access to the decimated grid. Generators now power big-box stores, high-rise apartment buildings, auto shops, fast-food restaurants, wastewater treatment plants and little country homes. And their low, incessant groan is the new drone note in the discordant symphony of post-storm Puerto Rican life.

The generators are a temporary fix that is raising health and safety concerns and highlighting the stark divisions of class in a place with a 45 percent poverty rate. They are also the only option for most Puerto Ricans for now, as the island struggles with restoring its electrical system — by far the most important and complex challenge the storm has presented.

In a news conference on Friday, Mr. Rosselló could not say when the system, which was infamously fragile before the storm, would be fully restored.

“There is no estimated date right now,” he said. “We have established, right at the beginning of this week, we want to have 10 percent of the energy generation in Puerto Rico. Now we’re up to 10.6 percent. And our expectation is, within the next month, to have 25 percent.”

Many big-box stores and hardware stores are selling out of generators for home use. Julito Ramírez, the Planet Honda general manager, said that his company was having a hard time keeping up with demand, selling 250 to 300 units per day. After ordering all of the generators he could find in the United States, he has turned to a cache he found in Canada.

For one customer, Victor Negrón, it would have to do. He said his old generator had given out two days earlier. “I’ve had to go to hotels to charge my phones,” said Mr. Negrón, 50, a health care executive. “We’ve lost all of the food in our refrigerator.”

The storm destroyed 85 percent of the island’s energy transmission and distribution system, and the fix could cost $5 billion, said Ricardo Ramos, chief executive of the beleaguered Puerto Rico Electric Power Authority, known as Prepa. The public utility is saddled with $9 billion in debt and filed for bankruptcy in July. The Puerto Rican government also filed a form of bankruptcy in May.

The Trump administration has asked Congress to approve a $29 billion aid package for Puerto Rico, as well as for hurricane-damaged Florida and Texas. But in the days after September 20, when Hurricane Maria strafed Puerto Rico, Prepa’s money troubles made it “almost impossible” to pay the large contracts required to bring in other states’ power companies to help restore the grid, said José E. Sánchez, a director with the United States Army Corps of Engineers and the head of the task force to restore power in Puerto Rico.

“It is not only personnel, but all the trucks and materials,” Mr. Sánchez said in an email. “That could cost millions of dollars.”

But Meena Dayak, a spokeswoman for the American Public Power Association, the trade group that coordinates the state-to-state mutual aid networks for public power utilities, said that Prepa never reached out to them for help.

“The way our mutual aid works is we can only go in if help has been requested,” she said over the phone on Friday.

Mr. Ramos, Prepa’s chief executive, said he did request help but when none came, he hired a Montana-based company, Whitefish Energy Holdings, to restore many of the power lines. Mr. Ramos said 200 subcontractors were already on the ground.

Andy Techmanski, chief executive of Whitefish, said that a shortage of housing for his crews meant that only 75 were on the island, and that clogged ports were making it a challenge to bring in heavy equipment.

He also said it would take six months or longer for all of Puerto Rico to have its power restored.

The rebuilding will be particularly difficult because many lines stretch across the island’s mountainous interior. There is also the question of whether Puerto Rico should modernize its rickety and outmoded system while it rebuilds. On Friday, the governor said that a modernization effort would “run parallel” with the effort to simply restore power. He said he has begun speaking with Elon Musk, the Tesla chief executive, about ways to increase green energy options for Puerto Rico, which received just 2 percent of its power from renewable sources before the storm. (Mr. Musk said on Twitter Thursday that rebuilding the island’s grid with independent solar and battery systems “could be done.”) 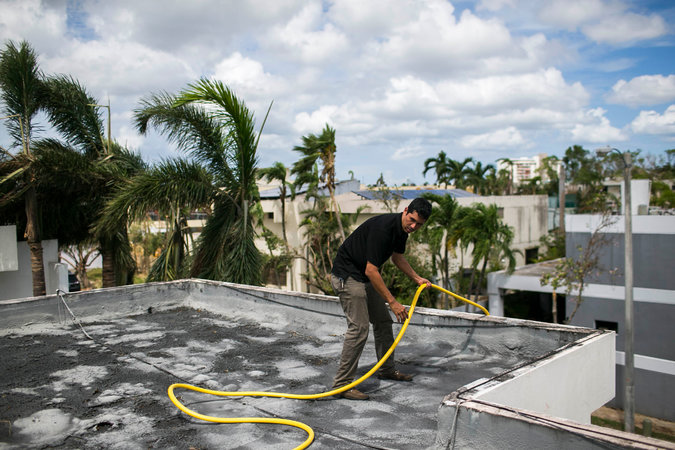 But Mr. Sánchez said that the assignment from the Federal Emergency Management Authority is to repair the system only. “We are there to repair-replace, but not to augment,” he said.

As he waited to buy his generator, Mr. Negrón sympathized with the governor. The island needed a better power system, he said. But people did not want to wait. His mother, he said, “wants her electric now.”

In the meantime, the generators rumble on, though not without problems. A few blocks from the Honda store, the Hospital San Francisco has had two generators fail since the storm, resulting in the evacuation of patients, according to El Nuevo Dia, a local newspaper. In a visit to the hospital Thursday, the lights were on, and a worker said a backup generator was powering them. But hospital officials declined a request for comment.

Across town at the Costco, Juan Torres, an assistant manager, showed off the massive, truck-size generator that the business, like many here, had installed before the storm. Mr. Torres said it was burning 1,000 gallons of diesel per day.

But Mr. Torres said that home generators normally offered at the store were sold out.

Across the island, the Army Corps of Engineers has set up 34 huge generators so far, running everything from police departments to water pumping facilities to a Prepa office, according to Lisa Hunter, a spokeswoman for the Corps. Corps officials said on Friday that 177 other generators arrived late in the week, with some of them headed to the United States Virgin Islands.

Camilla Feibelman, a founder of the Puerto Rico chapter of the Sierra Club who currently runs the Rio Grande chapter, said that Facebook was full of complaints about the generator noise on the island these days.

Adriana González, a Sierra Club organizer in Puerto Rico, said the high cost of a generator “creates a disparity” between rich and poor. In her neighborhood, she said, “you have one house illuminated, and then total darkness for like a block.”

Mr. Ramírez, the Honda store manager, said that some generators were stolen from the showroom in the days just after the storm. So the store now makes the sale in the showroom, then has customers pick up their generators from a warehouse a day later.

If nothing else, it is a good time to be a generator repairman like José Miguel Márquez, 35. Mr. Márquez said he was so busy these days that the biggest problem is finding time to deposit his checks at the bank.