Posted on December 5, 2017 by puertoriconewcomer 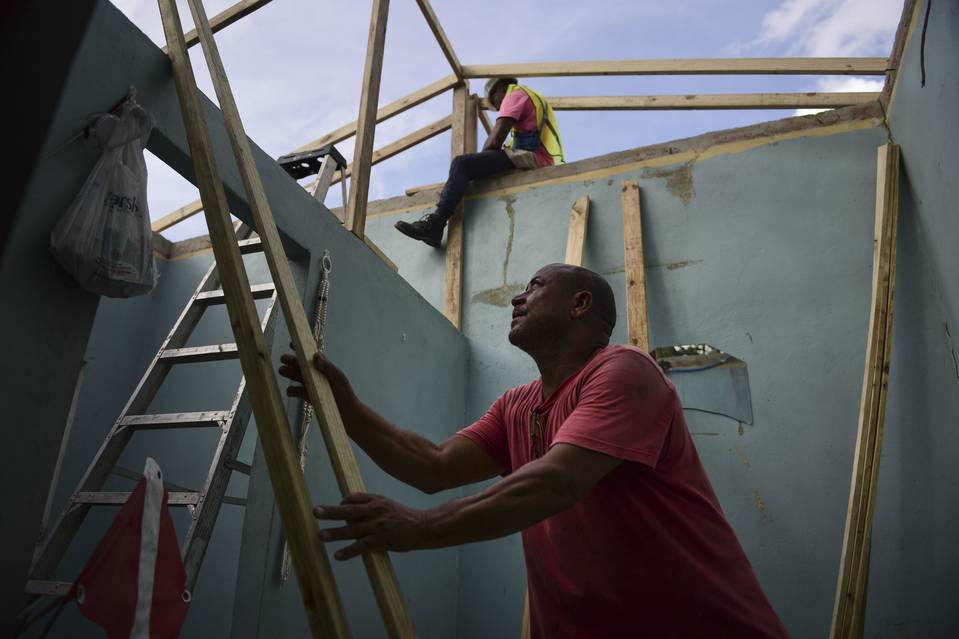 Pedro Deschamps helps workers hired by FEMA to carry out the installation of a temporary awning roof at his house, which suffered damage during Hurricane Maria, in San Juan, Puerto Rico. Photo: Carlos Giusti/Associated Press
By
Emily Nonko

Puerto Rico has adopted building codes that include some of the strictest standards in the world when it comes to hurricane resistance.

But there’s a big problem: Bad enforcement. About 55% of all structures in Puerto Rico haven’t been built to code partly because the government lacks an adequate process for code certification during the building process, according to Ricardo Alvarez-Diaz, president of the Puerto Rico Builders Association.

The result: About 250,000 housing units were damaged in the latest hurricane season, Mr. Alvarez-Diaz said. The number would have been much lower if they had all been built to code.

“The codes are great,” he said. “But if they’re not implemented, what’s the point?”

Weak building regulations and enforcement are common throughout the Caribbean. The results aren’t surprising when natural disasters hit.

For example, the death toll and destruction from the 2010 earthquake in Haiti was particularly severe because that country had no building code at the time, according to Vicente Moreno, the Caribbean region head for JLL, a commercial real-estate services firm.

Some of the hardest-hit islands in this year’s hurricane season, like Barbuda, lost most of their infrastructure. As many as half the structures need to be completely rebuilt, experts say.

The challenge now for the region is to rebuild using the highest standards so infrastructure and buildings are more hurricane resistant. The Federal Emergency Management Agency, which is coordinating much of the U.S. government’s recovery efforts in Puerto Rico and the U.S. Virgin Islands, says the new power system on those islands will be more resilient than the old one.

“I can replace all the wood poles with concrete poles. I can move substations that were built in the flood plain out of the flood plain,” said Mike Byrne, FEMA’s federal coordinating officer in Puerto Rico. “We’re going to be investing in designing a system that will withstand the next event.”

But it’s less clear whether the country is going to adopt a better system for certifying that apartment buildings, homes and other structures have conformed with the country’s building code.

Puerto Rico has adopted the strict International Building Code, which includes some of the highest standards in the world. But, unlike most cities in the continental U.S., local governments in Puerto Rico don’t send inspectors to approve planning documents or visit construction sites, according to Mr. Alvarez-Diaz. Contractors aren’t required to be licensed, he added.

Some structures, particularly in poorer communities outside San Juan, aren’t certified at all, experts say. Other times, private building inspectors approve building plans not built to international building-code standards. “You see that a lot, particularly with the way roofs are anchored or the foundation of the home was built,” Mr. Moreno said.

A spokeswoman for Ricardo Rossello, the governor of Puerto Rico, didn’t immediately respond to a request for comment.

Many of the top developers in the region have made a point of adopting the highest building standards to ensure the safety of their residents. “The biggest challenge, for companies like us with big reputations, is to make sure the construction is done correctly,” said Mr. Moreno.

Developers also are well aware that, especially after the horrible hurricane season of 2017, demand will increase for the strongest buildings. For example, the Dorado Beach master-planned community on Puerto Rico’s north coast suffered landscaping damage from Hurricane Maria but very little structural damage, according to Kenneth Blatt, chief operating officer of the hospitality division of Caribbean Property Group LLC, which controls much of the property.

He predicted that will boost prices of Dorado Beach’s condos and other homes. “We were built to Miami-Dade County hurricane standards,” he said. “I can withstand a 200-mile-per-hour wind.”

St. Louis-based housing developer McCormack Baron Salazar, which is becoming more active in the region, is considering adding solar power, micro-turbines and other backup sources of electricity to its projects to enhance their competitiveness. “Based on the conversations we’ve had with our equity investors, they may require it,” said Vincent Bennett, the firm’s president.

Other local architects see an opportunity to push for sustainable buildings that rely more on renewable energy. Such an initiative worked in Cuba, which has prioritized a more efficient use of power and greater availability of energy-efficient products. The country restored its power after Hurricane Irma in three days.

Richard Cuebas, a principal with the San Juan-based firm Integra Architecture PLLC, said “talk is loud” around sustainability measures like microgrids, localized energy grids that can disconnect from the traditional grid to operate autonomously. Nearly three months after the storm, many homes across the island still don’t have power.

Architect Fernando Abruña advocates simple strategies, like affordable rooftop solar panels and rainwater harvesting, incorporated in all housing across the island. “Before Maria, this was something sort of strange,” he said. “Now, I’m getting lots of calls from people interested in at least a very minimal system to take care of the refrigerator, a couple lights and a fan.”

—Peter Grant contributed to this article.