For Puerto Rico, the Return to Business as Usual Is Slow

Posted on March 19, 2018 by puertoriconewcomer

It’s sad for Puerto Rico.   With no power for extended time periods like 6 months, it’s extremely difficult to successfully run a business in a modern economy.  With less economic activity, fewer jobs available, this causes more people to bail to the states, leaving few workers and consumers in PR.  This downward spiral feeds on itself. 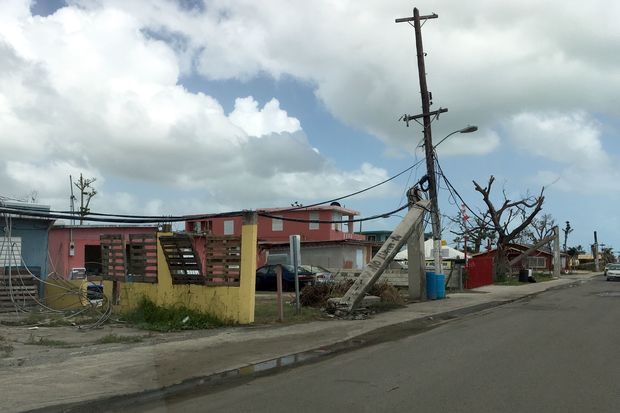 In Humacao, a city on the eastern coast just north of where Hurricane Maria’s eye passed, power poles and lines still litter the ground in some areas. Photo: Arian Campo-Flores/The Wall Street Journal
By Arian Campo-Flores

HUMACAO, Puerto Rico—Six months after Hurricane Maria barreled ashore here, Rafael Aparicio Cesaní and his partners are still trying to get their commercial printing business back to normal. The storm inflicted $3.6 million worth of damage, inundating equipment and destroying a solar-panel system that is used to power the facility.

They are awaiting an insurance payout and recently learned a loan they applied for was denied. Of 33 positions at the company before the hurricane, only 20 are filled now.

Though economic activity in Puerto Rico has picked up in recent months, businesses large and small are struggling. Electricity woes continue to plague the island, where 91% of power generation has been restored but the grid is prone to sudden outages. Insurance money has arrived slowly, with $1.7 billion paid in residential and business claims as of Jan. 31—about 40% of the expected total, according to the island’s Office of the Commissioner of Insurance.

And the market is shrinking as a result of an accelerating exodus of Puerto Ricans fleeing conditions on the island. An estimated 135,000 residents have relocated to the U.S. mainland since Maria, according to an analysis released this month by the Center for Puerto Rican Studies at New York’s Hunter College.

For large companies, the issue is, “Are we going to have enough critical mass of consumers to really make a go?” said Miguel Soto-Class, president of the Center for a New Economy, a think tank in San Juan. For small businesses, “it’s a really difficult situation,” he said. “Margins are much smaller. Cash flow is much more fragile.”

In January, Sam’s Club, the warehouse chain owned by Walmart Inc., said it would shutter three of its 10 locations in Puerto Rico as part of a broader set of U.S. closures. That month, Walgreens Boots Alliance Inc. said it was folding 12 of its 120 pharmacies on the island, for reasons including storm damage and financial performance.

Malls around the island are dotted with stores that haven’t managed to reopen. The tourism sector has taken a beating, with many large resorts closed and normally vibrant areas like Old San Juan still subdued. 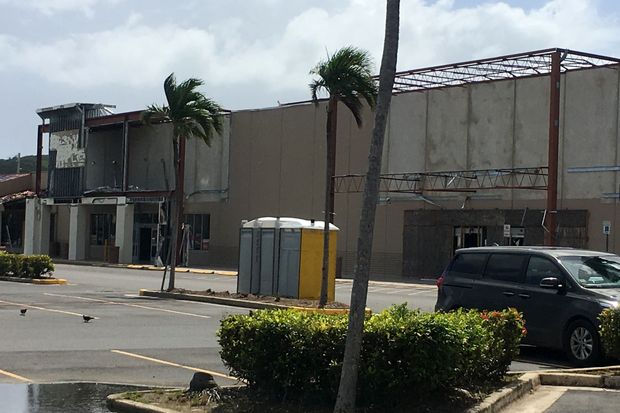 Many stores at the Plaza Palma Real shopping center in Humacao are boarded up. Photo: Arian Campo-Flores/The Wall Street Journal

Of the roughly 45,000 small businesses in Puerto Rico, an estimated 5,000 to 7,000 remain shuttered, said Nelson Ramírez, president of United Retailers Association, which represents small and medium-size businesses in various industries. A February survey of 300 businesses by the organization found that 9% weren’t operating, and among those that were, 30% were relying on generator power and 45% had reduced work hours.

In Humacao, a city of 54,000 people, electricity still hasn’t been fully restored. Power poles and lines litter the ground in some areas, and only a smattering of repair crews are visible on a typical day.

At the Plaza Palma Real shopping center, most stores are boarded up. Down the road, a Bristol-Myers Squibb Co. drug-manufacturing plant is operating normally but continues to rely on generator power because of a lack of reliable electricity, said Ken Dominski, a company spokesman.

The Sam’s Club here is one of the three that shut down, leaving Jacqueline Reyes, who worked as a cashier, out of a paycheck. She has visited job fairs and sent her resume to numerous companies, but so far hasn’t landed a new position. “We’re still in shock,” she said.

The Humacao area is usually a popular draw for tourists from the island and abroad, but only a smattering show up these days. Christina Vázquez, the owner of Water Sports and Ecotours, which offers kayak rentals and walking tours, said the winter months are usually active. But in January, she had only 34 visitors, down from 572 the year before.

“Sometimes I come here and get depressed, not seeing any movement,” she said.

According to a November survey of nearly 700 businesses in the region conducted by a local workforce development agency, Area Local, 41% of them were shut down and only 9% were operating normally. The agency is about to conduct another study that likely will show some improvement, said Luis González Torres, the executive director. But “the biggest problem is electricity,” he said.

Frances Flores Peña still hasn’t been able to open two El Jibarito restaurants she and her husband own in the area. The one in nearby Juncos still has no power and needs a new roof. The couple tried to reopen another one in Gurabo, but their customer base shrank significantly, prompting them to seek another spot to rebuild. They just opened a new restaurant in the Hato Rey area of San Juan.

Humacao is showing some promising signs. Five companies recently announced they were opening new facilities in the area, including one that will make solar panels, Mr. González Torres said.

At Model Offset Printing, Mr. Aparicio Cesaní said the volume of orders has increased substantially in recent months and the owners are hoping to resume full operations by summer. “We can recover,” he said. “Puerto Rico has the ability to regenerate itself strongly.”