Posted on February 3, 2019 by puertoriconewcomer

Why should high-priced consultant McKinsey be allowed to profit in the millions on inside information with a conflict of interest?

Puerto Rico’s bankruptcy case is one of the largest in United States history, with billions of dollars in bond debt and unfunded pensions to restructure, and mind-bending legal complexities.CreditRicardo Arduengo/Associated Press 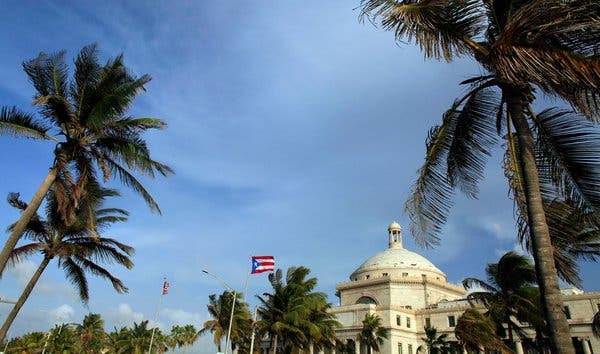 House lawmakers concerned about the possibility of self-dealing and other hidden conflicts of interest in Puerto Rico’s $123 billion bankruptcy introduced a measure on Wednesday intended to strengthen reporting requirements, after one of the case’s most influential consultants was shown to have an undisclosed stake in Puerto Rico’s debt.

Representatives put the bipartisan measure forward after The New York Times reported that the consultant, McKinsey & Company, had bought millions of dollars’ worth of Puerto Rican bonds at a deep discount and had not disclosed that investment. That puts the consulting firm, which is advising a federal oversight board as it leads the island through fiscal reforms and a debt restructuring, in a position to profit from the plans that it is helping to design.

“The people of Puerto Rico can’t have faith that this oversight board is putting their interests first if consultants helping implement the restructuring could profit from how much debt service is available under the very fiscal plans they design,” said Representative Nydia M. Velázquez, the New York Democrat who is the lead sponsor of the bill.

Other sponsors include Representative Rob Bishop, the Utah Republican who is chairman of the House Natural Resources Committee; Representative Raúl M. Grijalva, the Arizona Democrat who is expected to become chairman next year; and Jenniffer González-Colón, the Republican who represents Puerto Rico as a nonvoting member. The House Natural Resources Committee has jurisdiction over United States territories and drafted the bankruptcy-like law that governs Puerto Rico’s restructuring proceedings, but it left out the disclosure provisions customarily found in bankruptcy statutes.

Representative Andy Biggs, an Arizona Republican and member of the House Judiciary Committee, is also co-sponsoring the bill. The Judiciary Committee has jurisdiction over the courts, including bankruptcy courts. Mr. Biggs said that as now written, Puerto Rico’s restructuring law left unclear what was supposed to happen if an adviser did appear to have a conflict of interest.

An examination of court records associated with Puerto Rico’s case shows that a hedge fund owned by McKinsey has invested in a type of bond backed by the territory’s sales tax. Until this year, those bonds were available at a deep discount because of their nonpayment risk, but the federal oversight board announced an unexpectedly favorable repayment plan for those bonds, causing the prices to rebound. If all goes according to plan, McKinsey’s hedge fund will more than double its money.

McKinsey has said it obeyed all necessary disclosure requirements. A spokesman for the company said on Wednesday that its investment division, MIO Partners, manages money for the firm’s partners, former partners and employees and operates separately from its consulting activities.

“McKinsey consultants cannot direct MIO investments and do not have knowledge of MIO third-party managers or specific investments,” he said. “Information regarding specific investments held by MIO is not shared with McKinsey & Company.” He added that Puerto Rico’s oversight board had begun an independent review of the situation.

In any bankruptcy, the money available to repay debts is limited, so if one type of creditor gets more, the others will generally get less. When the bankrupt party is a government, it also means less money for public services. In Puerto Rico’s case, much of the money that pays for those services already comes from taxpayers in the 50 states.

The cost is bound to be steep: Puerto Rico’s bankruptcy case is one of the largest in United States history, with billions of dollars in bond debt and unfunded pensions to restructure, and mind-bending legal complexities. McKinsey will have earned $69 million as of the end of December, according to court filings and the terms of its contracts with the federal oversight board.

The firm’s conduct has been challenged in other bankruptcies, as well. In November, the Justice Department asked a bankruptcy judge in Virginia to reopen the case of a coal company, Alpha Natural Resources, and force McKinsey to return the roughly $20 million it was paid because McKinsey had concealed an investment stake. A hearing to discuss the matter has been scheduled for January.

And a bankruptcy judge in Houston, David R. Jones, this week ordered limited discovery in the bankruptcy of Westmoreland Coal, where McKinsey’s role representing the company is also being challenged.

McKinsey has said it did nothing wrong in either case.

In October, congressional aides met with the chairman of Puerto Rico’s federal oversight board, José B. Carrión III, and expressed concern over McKinsey’s undisclosed investments. Mr. Carrión said the board was confident that McKinsey’s advice was not tainted, but the aides said there was at the very least an appearance of impropriety. They warned that they were working on a legislative fix.

The United States Bankruptcy Code requires the experts who work on bankruptcies to have undivided loyalties, which is intended to uphold public confidence in a system where large amounts of money constantly change hands. All professionals working on a case are required to make sworn disclosures of any investments and business activities that connect them with the other parties. Being connected does not automatically disqualify the professional, but it must be disclosed; the penalties for hidden conflicts can be severe.

As a United States territory, Puerto Rico was not eligible for bankruptcy. Congress had to enact a new law, called Promesa, to give the island a legal framework for its restructuring.

The new bill would require all professionals to make the usual sworn disclosures — not just McKinsey, but also other experts working for Puerto Rico’s oversight board, including Citigroup, Ernst & Young and Proskauer Rose.

It would also give the Justice Department’s bankruptcy watchdog, the Office of the United States Trustee, an explicit mandate to investigate possible conflicts of interest and empower the federal judge handling Puerto Rico’s case to block the payment of an adviser’s fees if a conflict is found.

A version of this article appears in print on Dec. 20, 2018, on Page B8 of the New York edition with the headline: House Seeks Clarity on Puerto Rico’s Bankruptcy.