Posted on February 10, 2019 by puertoriconewcomer

Good journalism helps to shine a light on problems so they get more attention, and thus get more focus and resources to be fixed.  Being shot in the face can’t be good for tourism in PR.  Problems such as violent crime, carjackings, corruption, excessive potholes in the roads, government inefficiency, being known as the welfare island, and bad customer service skills (not calling back, not emailing back) need to be improved in order for Puerto Rico to be successful.

If the Puerto Rican government doesn’t get a handle on these things, PR could become more like Cancun or Acapulco Mexico where the violent crime became so bad that tourists stopped visiting.

No arrests have been made and police continue to question people about the incident.

By David Chang and Ted Greenberg

A Jersey Shore woman is fighting for her life after she was shot in the face while vacationing in Puerto Rico.

Angelis Molina, 20, recently lived in Ventnor, New Jersey, and worked as a waitress in Atlantic City. She traveled to Puerto Rico in mid-January and decided to stay there longer than expected after coming across a modeling opportunity.

“She found a job and she said, ‘I just want to stay here for a few months please, just to experience it a little more,’” Angelis’ mother, Michelle Molina, said. “And I tried to tell her, ‘It’s not what you think it is there. It’s dangerous.’”

On Thursday, Angelis Molina was inside an apartment with a group of people in San Juan when she was shot in the face by an unidentified gunman. She was taken to the hospital where she remains in critical condition.

“I feel like a part of me has died,” Michelle Molina said. “But I’m trying to keep faith that she’s going to be okay.”

No arrests have been made and police continue to question people about the incident. They say one man has provided varying accounts.

Angelis Molina’s father flew to Puerto Rico over the weekend and is staying with his daughter at the hospital. Meanwhile, Michelle Molina continues to pray for a miracle.

“I’m trying to put everything in God’s hands,” Michelle Molina said. “Just hope He pulls her through.”

While Angelis Molina’s father waits in a Puerto Rican hospital for her to recover from a critical gunshot wound, her mother, Michelle Molina, sends voicemails from her home in Mays Landing so he can play them for her.

Angelis Molina, a Ventnor resident who was working as a waitress in Atlantic City, had gone to San Juan, Puerto Rico, for the first time to celebrate her 20th birthday Jan. 21 with a friend. After deciding to extend her stay, she was shot in the face Jan. 31.

She is recovering from her most recent surgery, which removed one of her eyes, her mother said.

On Friday evening, Michelle Molina said she got word that her daughter’s swelling was going down.

“What a blessing,” she said.

The bullet, she said, had entered her daughter’s mouth and exited her cheek.

“It’s a tough situation as a mother because I warned her. I really did,” Michelle said. “I just did not feel good about it.”

Despite her apprehensions about Angelis’ travels, Michelle said her daughter was having a great time on her trip.

“She got down there and was having so much fun. She met these people and felt like, ‘Well, now I’m having the time of my life, I just want to stay a little bit more, even if it’s just for a few months,” Michelle said.

Her mother said Angelis had attended a festival, met new people and was even approached for restaurant and modeling jobs. But Michelle is now concerned about the kind of people her daughter encountered.

“She ended up in just not a good group of people in that time, but being young and innocent like she is, she sees the good in people. She doesn’t judge people. She put a little more faith in them than she should,” she said.

One of those new friends, Renán Colón Pujadas, gave a version of events — that the shooting took place in the course of a robbery — to police last Friday that has since been ruled out due to contradictory versions, according to PrimeraHora, which also reported that Pujadas had a history of giving false information to police in cases of theft and robbery.

Molina’s mother said she had reservations about Angelis’ new acquaintance after being sent photos of him.

“I did not know who this kid was at all, but from what she told me he was a good guy. Not someone at all that would have hurt her,” Michelle Molina said. “What he really is as a person is not good either. His whole persona is not good.

One thing her daughter said stuck out to Molina: “He is showing me the time of my life.”

The details surrounding what happened Jan. 31 are under investigation by the Puerto Rico Police Department, the department confirmed Tuesday through an interpreter.

“There’s been so many different accounts from the people that were involved that the police are trying to put their finger on what exactly is the truth,” Michelle said.

Angelis’ father, who works as a driver for UPS, flew down Sunday and plans to stay there as long as he can.

While she continues to wait on more information from police and medical professionals, Michelle said she is overwhelmed by community support. A group of girls who went to high school with Angelis created a GoFundMe page to help pay for medical bills Michelle Molina said she hasn’t even had the time to think about. As of Thursday, $1,590 had been raised toward a $5,000 goal.

She said this is characteristic of the kind of effect her daughter has had on others.

“You have no idea just how many people love you,” she tells her daughter in her voicemail messages. “The outpouring is amazing.” 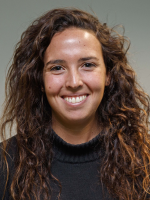