Posted on March 1, 2019 by puertoriconewcomer

Puerto Rico’s poverty rate hit 44.9%, according to new data released today by the US Census Bureau—that’s nearly double the poverty rate in Mississippi, the most impoverished of the fifty states. It’s the latest in a string of bad economic news for the self-governing US territory.

Puerto Rico’s rap sheet isn’t so different from that of many troubled European countries. It’s been in a recession since 2006—longer even than Greece. And like many euro zone countries, it can’t inflate its way out of its problems because it uses the US dollar.

In June 2012, the Puerto Rican government had $67.7 billion in total debt outstanding, not including $30 billion in unfunded pension liabilities. That works out to more than $18,000 per capita, compared to about $11,000 for Massachusetts, the most indebted US state per capita.

Puerto Rico’s debt to GDP ratio comes out to 84% versus the US median of 3%, according to Morgan Stanley. Although the territory’s unemployment rate has fallen from a high of 16.9% in 2010, it’s still high at 13.5% as of July. 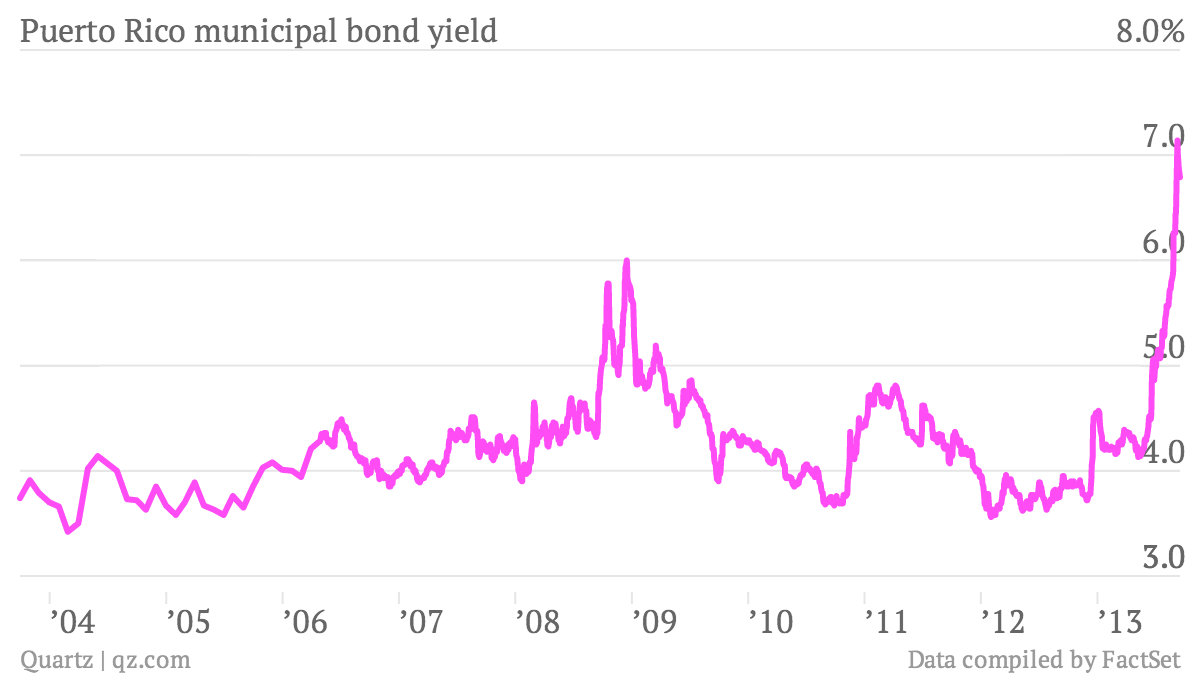 Yields on Puerto Rican municipal bonds have doubled from a year ago, as investors have grown worried that the little US territory won’t be able to pay off its massive debt pile. And if you’re an American the drama could hit close to home; there’s a decent chance that your pension fund has some Puerto Rican bonds in its portfolio. Detroit’s July bankruptcy hasn’t helped—the city’s potentially huge losses for bondholders are making investors in the entire asset class jittery.

Unlike Detroit—whose financial demise has spanned decades—Puerto Rico’s woes are new enough to take some investors by surprise. Municipal bond funds have been attractive places for institutional investors to find yield, and most of those bond funds have (or had until recently) significant exposure to Puerto Rico. 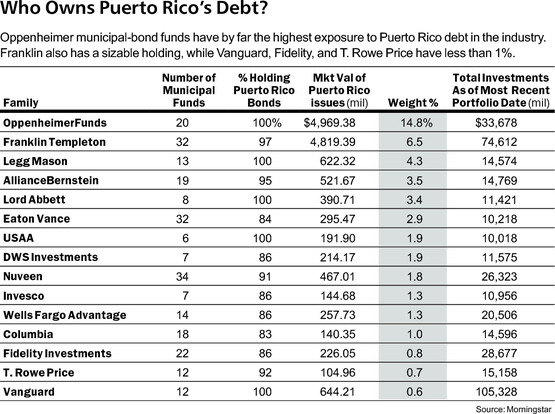 If the territory were to default, it could find itself in some sticky legal dealings. Unlike Detroit, Puerto Rico can’t file for Chapter 9 bankruptcy protection, which allows municipalities to negotiate payment plans with their creditors under court supervision. The lack of court supervision could make the process messier (pdf), and reduce the probability that the territory could return to the public markets for funding in the near future.

Fortunately, not all of Puerto Rico’s public debt looks sour. Although Moody’s rates the Commonwealth of Puerto Rico Baa3 (the lowest investment-grade rating), its Sales Tax Financing Corporation earns an Aa3 rating (near the top of the scale).

Then again, that would be little consolation for one in five Puerto Ricans who work for the government, who could see their pensions slashed or jobs cut if Puerto Rico’s debt situation worsens.