Rebuilding a Puerto Rico Barrio: ‘Dead Is the Only Way They’ll Ever Get Me to Leave’ – Vietnam neighborhood in PR

Posted on March 6, 2019 by puertoriconewcomer

Rebuilding a Puerto Rico Barrio: ‘Dead Is the Only Way They’ll Ever Get Me to Leave’

Hurricane Maria led to a host of new plans to fix island barrios plagued by chronic flooding. A look at the Vietnam neighborhood shows why they may never be achieved.

Victor Manuel Torres has lived for more than half a century in a barrio called Vietnam. 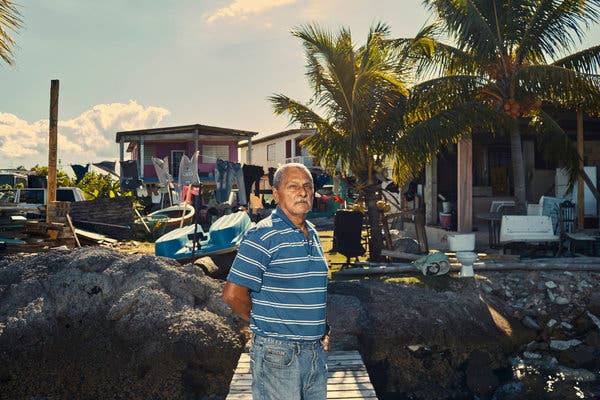 Then, with his other hand, he lifted a rusty machete. At 77, he has lived for more than half a century in a barrio called Vietnam, abutting San Juan Harbor. For nearly as long, municipal authorities have tried to evict him.

“This is how I have held them back,” he told me, waving the machete. “The storm was a passing shower compared to what we have survived here.”

Today numbering some 250 families, Vietnam began like many barrios in Puerto Rico. Laborers lured from the countryside during the island’s postwar industrial boom established a squatters settlement. The harbor was a bustling site of factories, military bases and jobs, but nobody had supplied housing for workers. So the workers did it themselves.

They cleared a swath of mosquito-infested mangroves and cobbled together what were at first rickety shacks that sank time and again in the mud and rain. When the shacks didn’t collapse on their own, the police would come and tear the houses down, hoping to force residents out. The pattern continued even as the houses became cinder block and concrete and the settlement grew into a neighborhood.

By the 1970s, the quagmire of conflict gave rise to the name Vietnam.

For residents, it became a badge of honor.

Now, as the federal government prepares to spend an unprecedented $20 billion to repair neighborhoods across Puerto Rico that were ravaged by the Category 4 storm, the goal of finally replacing Vietnam’s besieged warren of cinder block houses with a flourishing community capable of weathering the hurricanes of the future seems at once more urgent and less likely than ever.

The reasons have to do with basic concepts like home and safety — things that might seem straightforward, but are not so easily defined here.

Much of the island’s population lives in areas, like this one, that are vulnerable to floods and landslides. Thanks to the historical patchwork of homes built and exchanged informally across generations, nearly half of all residents, according to studies, lack the clear titles to their properties that would allow them to take out housing reconstruction loans, sell their properties legally and move to safer neighborhoods. 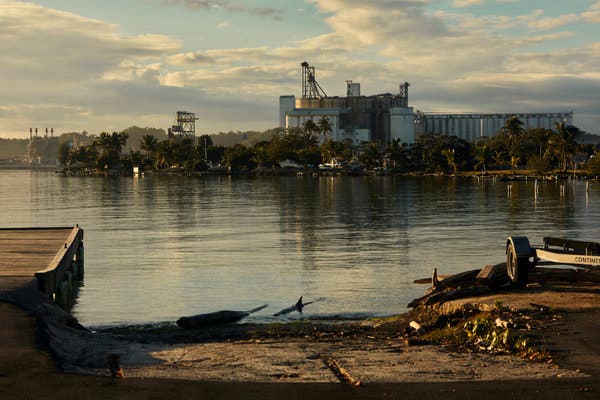 The harbor in Vietnam.
A church that was destroyed by Hurricane Maria in Vietnam. 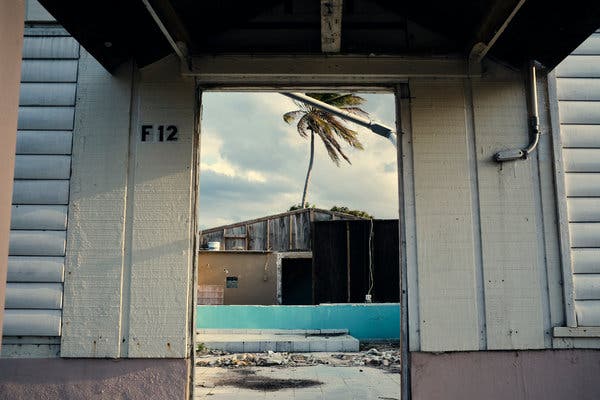 With crippling debt and a poverty rate that is double Mississippi’s, Puerto Rico has tried to resolve these problems on its own for years, without success.

The billions set to be spent by the federal Department of Housing and Urban Development in the coming months for an island where more than 90,000 homes were destroyed represents the largest such grant in the history of federal disaster relief efforts. Hoping to make the most of it, Puerto Rico’s governor has come up with the outlines of a proposal for new development across the 110-mile-long island.

The proposal promises nobody will be forced to move. But there’s a catch. Because of federal regulations, those living in flood-prone areas won’t be given any public money unless their homes comply with flood-protection standards.

Complying with regulations that require elevating houses, employing licensed contractors, providing wheelchair access and using only certain materials can be just too costly for many Puerto Ricans — more costly than the value of their homes. This means hundreds of thousands living in barrios like Vietnam will not get assistance.

As an alternative, they will be offered titles to free new apartments elsewhere.

If they are available. The plan is vague. It wagers that, provided with enough incentives, for-profit developers will build the necessary housing and infrastructure, bringing crucial jobs with them.

But that’s a gamble. Over the last century, Puerto Rico has produced landmark social housing projects like El Falansterio in San Juan, an Art Deco-detailed waterfront complex from the 1930s that, all these years later, remains a thriving community and a model of elegant, humane design.

Unfortunately, anyone who knows about rising construction costs, the island’s crippled bureaucracy and its legacy of failed projects, and the federal government’s looming deadlines for spending reconstruction money also knows that the only things that may actually end up getting built are sprawling, quasi-suburban projects on cheap, shovel-ready agricultural land, uncoordinated with services and transit.

And also a bunch of luxury hotels and condo towers on the coast.

Omar Marrero, who runs Puerto Rico’s Central Office of Recovery, Reconstruction and Resiliency, demurred while acknowledging the problems. “We will try to keep communities intact,” he said. “But to the extent the legal requirements don’t allow us to use federal dollars, families will have to decide whether they want to remain where they are.”

Carmen Chévere Ortiz has decided already. She became accustomed over the years to floods in Villa Calma, an informal working-class community near the northern coast of the island that lies below sea level.

“But Maria was different,” she told me the other day. The area was swamped in minutes by what seemed to her like a tidal wave that suddenly swept away houses and cars. “We lost everything,” Ms. Chévere said. “Now I just want to get out of here as fast as possible.”

On the other hand, many islanders in similar predicaments, like Mr. Torres, won’t want to leave, free apartment or not.

That’s because security — or what is also called resilience in the context of climate change and natural disasters — entails more than just high ground and a sturdy roof. In struggling places where people, feeling they cannot rely on the authorities, count on each other, safety comes down to community.

The neighborhood was built up around factories and mills. 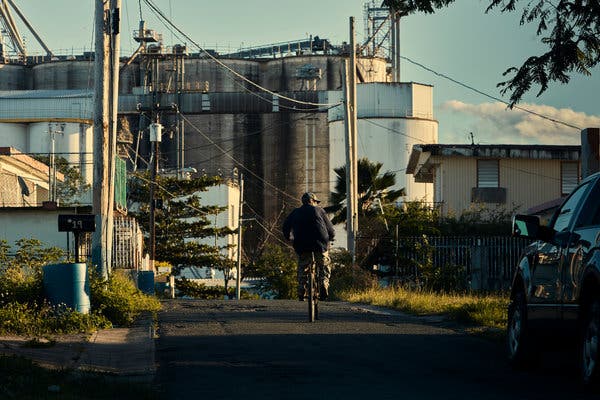 It is why many residents of the Lower Ninth Ward in New Orleans, where dozens drowned during Hurricane Katrina in 2005, fought tooth and nail to stay put, notwithstanding that the neighborhood is a giant bathtub. Or why Indonesians in shanties crowding sewage-filled canals went to court in Jakarta to sue the authorities for moving them into new apartment towers miles away.

“People usually opt to preserve their communities and ties to the land, even if it means living in harm’s way,” points out Eric Klinenberg, a sociologist at N.Y.U. whose specialty is social resilience. “They have seen enough projects go wrong to suspect that they’re better off risking the next big storm and staying home, where at least they have friends and family nearby.”

Carmen Ayendez, who lived in Vietnam much of her life, said her father four years ago took up the government’s offer of a new home in Sunset Harbor, one of three housing projects built by the municipality of Guaynabo — Vietnam straddles Guaynabo, a mostly prosperous district outside San Juan, and the adjacent municipality of Cataño — with the purpose of relocating Vietnam’s residents.

When her father died two days after signing the new lease, Ms. Ayendez took over the house. But shortly after moving, she started waking in the night, unable to breathe.

It turned out the new house was plagued by mold. Ms. Ayendez hasn’t been able to get rid of it. When Maria hit, her roof cracked. She was supposed to be safer in Sunset Harbor.

“I preferred living in Vietnam,” she said. “I built my own house there on a piece of land that my dad gave me when I was 19. It was a wooden house. It had bats and worms, but not mold. I had my friends and neighbors. The roof wasn’t very secure, but it was home.”

To protect its residents from evictions and gentrification, San Juan’s largest barrio, on the banks of the Martín Peña canal, has been operating as a community land trust for some years. It ensures everyone in the barrio has rights, a stake and a say. The trust has negotiated voluntary relocations where the clogged, polluted and frequently overflowing canal needs to be dredged or widened and homes get in the way.

Evelyn Quiñones, 63, one of the community’s leaders, showed me the house she agreed to move to a few years ago, on a street just outside the barrio. The decision to leave wasn’t easy, she said. It made all the difference that the choice to move was hers, the new house was in good shape — and that her relocation improved conditions for people inside the barrio.

Evelyn Quiñones at her former home in Vietnam. 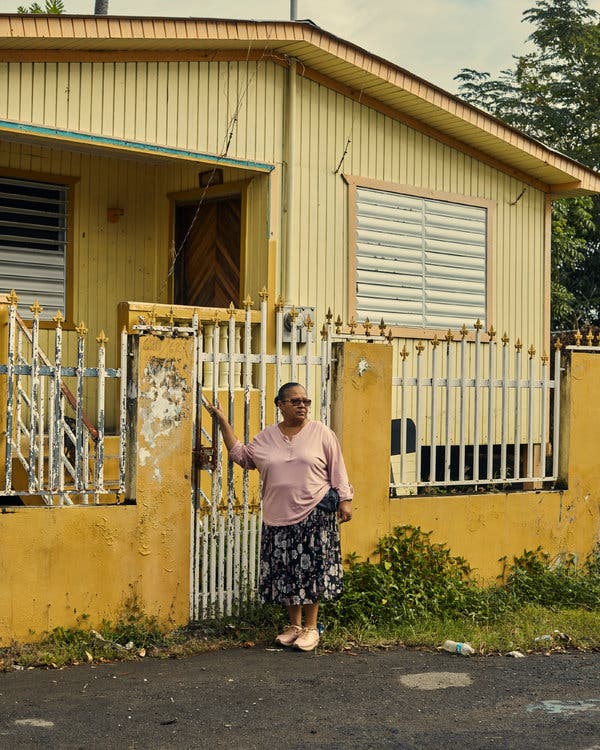 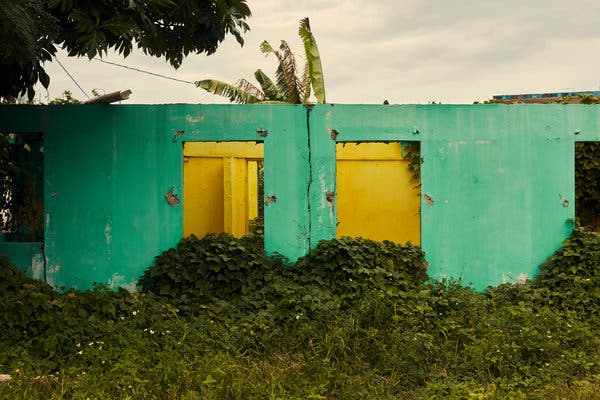 “I return to the old neighborhood every day,” she said. “The new house is bigger and I feel safe there. But these are not my people.”

Through the generations, the community of Vietnam has similarly bonded over its common enemies, meager resources and views of the harbor, which have also insured that moneyed interests continue scheming. During the early 2000s, the mayor of Guaynabo, in league with developers, started expropriating properties to make way for luxury villas.

Neighbors banded together, sued and won.

“Just because you don’t have a title to your property and you are poor doesn’t mean the government shouldn’t work with you to improve your neighborhood,” said Carmen Yulín Cruz, San Juan’s mayor. She worries about the current approach.

So does Ricardo Álvarez-Díaz, former president of the Puerto Rico Builders Association. “My fear is we will build houses for the sake of building houses where people don’t want to live,” he said. “People don’t just need houses. They need communities. The hurricane proved this.”

“It was the communities not FEMA,” he added, referring to the Federal Emergency Management Agency, “that saved most people.”

After Hurricane Maria, Mr. Torres replaced the zinc roof that blew off his home in Vietnam. A stack of bamboo washed ashore during the storm and he used it to fashion a chair, now perched on his patio, facing the harbor.

He said he would gladly accept money from the federal government to fortify his house. But, with or without it, he’s content just to sit in his chair and watch the sun set over the harbor. He is not moving.

“Dead is the only way they will ever get me to leave,” he said. “Maybe not even then.”

Michael Kimmelman is the architecture critic. He was previously The Times’s chief art critic and, based in Berlin, created the Abroad column, covering cultural and political affairs across Europe and the Middle East. @kimmelman•Facebook