Why Puerto Rico Is No. 1 on Our Places to Go List – for vacation

Posted on March 8, 2019 by puertoriconewcomer

Why Puerto Rico Is No. 1 on Our Places to Go List

Recovering from Hurricane Maria, in 2019 the island represents so many fragile spots around the globe. 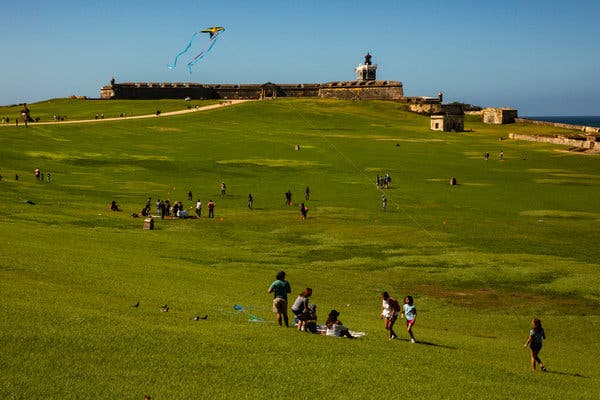 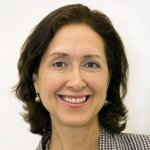 For as long as I can remember growing up in Puerto Rico, El Morro, the indestructible fort with the endless lawns at the entrance to San Juan harbor, was where you went to fly a kite. And on a recent sunny afternoon, just as expected, a couple and their young son were there trying to catch an updraft to loft a plastic butterfly with a long blue tail into the sky.

On Fortaleza Street, an art installation of colorful umbrellas hovered above pedestrians, triggering countless selfies. A short ferry ride away from the old city, at the Bacardí rum distillery in the town of Cataño, visitors sipped cocktails in an open-air pavilion with a roof shaped like a bat in flight.

But as Puerto Rico tries to come back as a premier Caribbean destination after the devastation wrought by Hurricane Maria in Sept. 2017, just a short drive from the pricey beachfront hotels, hundreds of residents are still living under leaky tarps, their poverty on display in glaring bright blue. 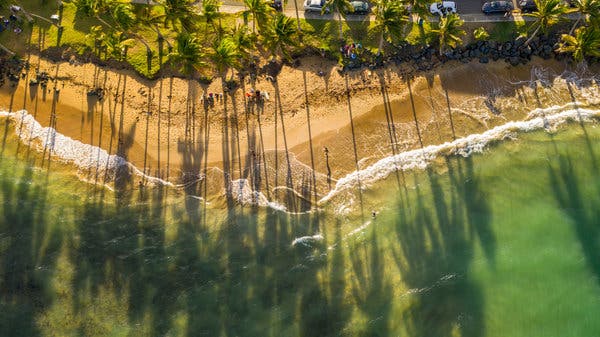 The tourists celebrating birthdays would not know that the coffee farms will take years to recover — and the red mangrove forests decades — or that commercial fishermen in the town of Luquillo still can’t get their usual haul of lobster, octopus and conch. After the Juan Martín River jumped its banks during the hurricane and took over the dirt road to the beach, the fishermen said, access is so difficult that they need to car pool on four-wheel drive vehicles or they can’t fish as much.

Why should tourists worry about any of this? Isn’t a Caribbean vacation by definition an escape from life’s troubles?

But in the juxtaposition of its two worlds, the tropical paradise versus the struggling island, Puerto Rico is representative of the many fragile places around the globe right now: The islands facing a future of sea level rise and extreme weather. The arctic spots where winter itself is under threat. The cities where a combination of climate change and bad planning has resulted in devastation. 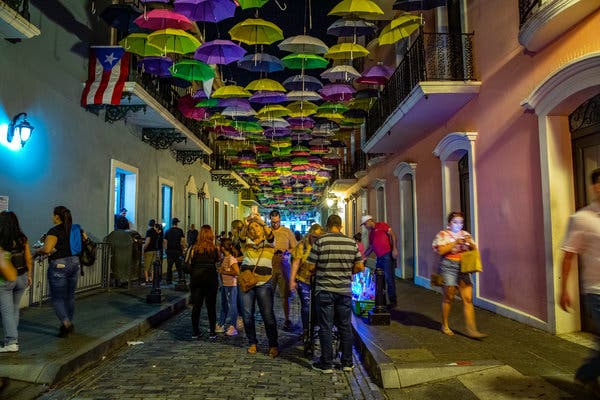 That is why Puerto Rico earned the No. 1 spot on our annual list of 52 Places to visit in the coming year. The island, and the other beautiful destinations now at risk raise an urgent question: Do we owe something to the places that make us happy?

“This is the new normal and people have to look at this new normal and embrace it,” said Martha Honey, executive director of the Center for Responsible Travel in Washington, D.C.

The trend in travel has skewed in recent years toward more awareness and sensitivity — eco-tourism, voluntourism, agritourism, the idea that as visitors we should not cause harm and should seek out authentic experiences that get us deep into the local culture. Perhaps it would not be such a stretch to redefine the relationship between leisure travelers and their dream destinations.

Traveling more consciously is not such a heavy lift, experts like Ms. Honey said. A baby step would be to take account of the realities of the place and then incorporate them into itineraries and more targeted spending — get out of the resort, patronize local businesses, reward hotels set back from the ocean with a stay.

Outside the town of Luquillo, where the river was diverted by Hurricane Maria.CreditTony Cenicola/The New York Times 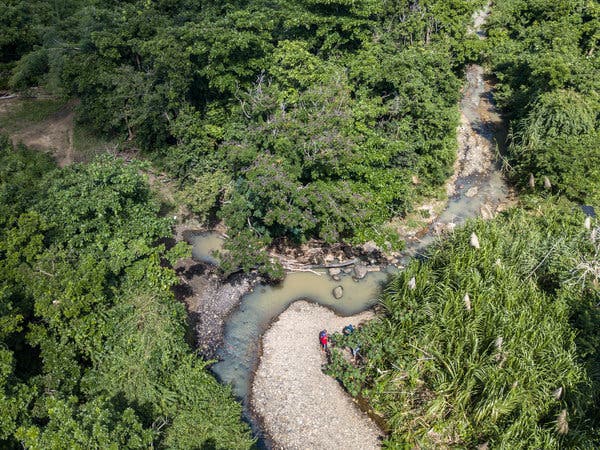 If tourists did what Puerto Ricans like me do when they sightsee, they would eat roasted whole pig (“lechón asado”) in Guavate south of San Juan or seafood in the southern town of Salinas or bar-hop in the mountains among roadside restaurants and food shacks (“chinchorreo”).

Many will find that this new way of travel can lead to better vacations because it helps build a connection to the place, Ms. Honey said.

Tour operators say that those traveling this winter to Puerto Rico and other islands damaged by Hurricane Maria tend to be “repeats and loyalists” going back to what they already love. After a temporary drop, said Jack Richards, president and CEO of Pleasant Holidays in Los Angeles, which handles travel to 23 islands in the Caribbean, bookings started picking up last June and “Caribbean tourism is back with a vengeance now.”

“Everybody understands that the best way to help Puerto Rico is to book there and help the local economy,” he said.

Organizations that help tourists combine sightseeing with volunteer work, such as Para La Naturaleza, a nonprofit that works on reforestation, are reporting higher demand. There are now more opportunities to help. Having survived the worst of the hurricane largely on their own as the government’s response faltered, residents’ self-reliance or “auto-gestión” efforts have kicked into high gear, with many communities organizing and welcoming help to install solar lights, plant native trees, clear trails and launch rebuilding projects. 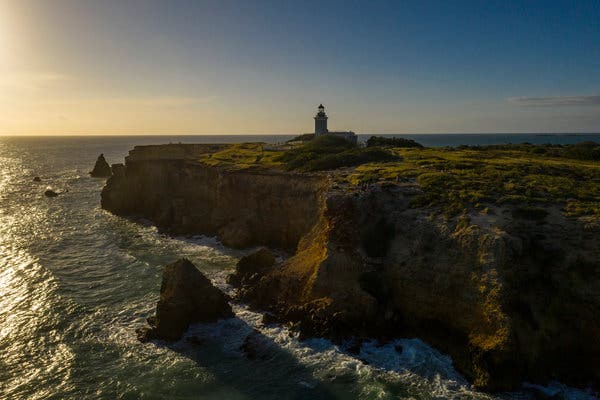 But just venturing out of San Juan to spread tourism revenue around can be enough. Puerto Rico’s recently formed destination marketing organization, Discover Puerto Rico, is steering attention to more far-flung attractions because, officials said, about 77,000 tourism jobs depend on it.

Another group, the Coalition for the Northeast Ecological Corridor, is working on plans for a new trail that would link “El Yunque,” the inland tropical rain forest, to the coast between the towns of Luquillo and Fajardo. Cristóbal Jiménez, the group’s president, said the corridor was poised to become a major eco-tourism draw — it is home to prime nesting grounds for the endangered leatherback sea turtle and to more than 800 plant and animal species.

They, like the 3.2 million residents of this American territory, are proving their resilience.

A version of this article appears in print on Jan. 13, 2019, on Page TR2 of the New York edition with the headline: 1 Puerto Rico.

In Puerto Rico you have to pay in dollars. This makes it absurdly expensive as a tourist destination. It’s even worse for San Martin with the Euro. Face it, a slow easy going place with a laid back lifestyle needs a weak currency – then the turistas will flood in. The only other possible rational for tourism in a high currency area is luxury tourism, which Puerto Rico can’t compete for because it’s a place that’s considerably poorer and more crowded than others. San Juan will remain a cruise ship day trip until PR is an independent nation with it’s own currency, or a place where living standards rise above the rest of Lain America. The government did all the wrong things running the national pension programs like a ponzi scheme. PR has a great culture, but you can’t guilt people into wasting money.

Puerto Rico needs to define a new basis for its economy. Tourism is an excellent choice. At the moment, it is a giant welfare colony. Like its South American peers, it is rife with corruption and incompetence. It’s infrastructure was decaying long before the hurricane. The hurricane was merely a coup de grace. Crime is clearly an issue. Iron bars on the windows, broken glass embedded in garden walls, garbage in the street. It best bet is to create zones free of these reality’s.

We have lived in Puerto Rico and had a life-enriching experience as a result. My wife and I have visited the island for many years since, including our 50th anniversary. We have been there twice since the hurricane. (We’re not Puertoricanos) One important way to help Puerto Rico get back on its feet is to call or write to your congressional representative and request that they support Repeal of the Jones Act. President Trump realized the impact that this onerous 1917 tax imposes and had temporarily suspended it. It causes a 30% surcharge on everything (all things) shipped to the island and, all things must be shipped there on US flagged ships. There is no competition and profits flow directly to a few extremely wealthy, politically connected, old line Brahmins. This action would free-up hundred of millions of dollars for available spending on the island by the population that is struggling with this unfair taxation. A simple phone call, email or letter will do. Por favor!