Posted on January 17, 2020 by puertoriconewcomer

For the second day in a row, a strong earthquake hit Puerto Rico before dawn.

“Power in my room, here in old San Juan, is out. Open the door, if you can see it, just looking out on the rest of the city. And here’s the scene, so you can’t really make that much out. There are some lights still on.” “So epic! The power went out at the airport.”

PONCE, P.R. — The auditorium where Lenda Torres Rodríguez and some of her neighbors sought refuge on Tuesday after the latest in a series of earthquakes convulsed Puerto Rico seemed almost as unreliable as the houses they had abandoned. Every time a new aftershock hit, the windows made ominous cracking sounds.

So they huddled outside on beach chairs, or hunkered down in their cars, waiting for help from the government that by Tuesday evening had still not arrived.

“This is scarier than the water Maria brought,” said Ms. Torres, 44, recalling the last epic disaster that drove her from her home, Hurricane Maria in 2017.

The deadly government failures that left the island in a state of chaos for months after the 2017 storm robbed Puerto Ricans of any belief that their leaders could manage another natural disaster. With a sense of doomed inevitability, people have braced in the two years since for the next emergency that would once again leave them feeling unprepared and abandoned.

Seismic Activity
Why Are So Many Earthquakes Happening in Puerto Rico? 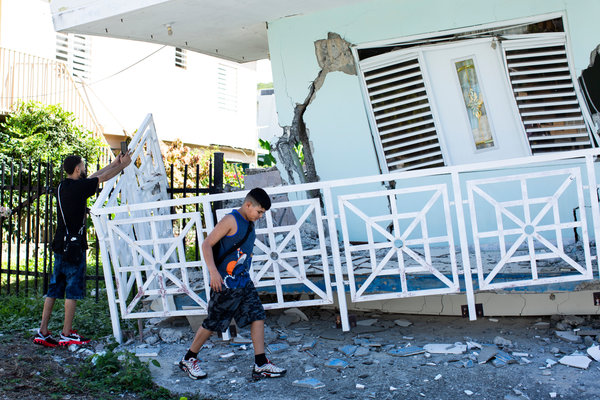 What they did not expect was for the menace to come from the earth rather than the sky.

The strong 6.4-magnitude earthquake that rocked Puerto Rico on Tuesday plunged almost the entire island into a blackout similar to the one following Maria, reduced some homes to rubble and triggered new fears that the government would find itself overwhelmed by catastrophe. It was the second big quake in two days.

Unable to catch a break from Mother Nature, few Puerto Ricans expressed confidence that public officials would protect them from new powerful quakes or the devastation they could cause. A United States commonwealth facing crushing debt and bankruptcy, on the heels of a political upheaval that ousted two governors last summer, found itself asking: Again?

“I prefer Maria,” declared Nicole Santos Torres, 21, Ms. Torres’s daughter, as she sat surrounded by relatives outside the Juan “Pachín” Vicéns Auditorium in Ponce, the biggest city in southern Puerto Rico, the region most affected by the quake.

A few people in a red Jeep distributed food late on Tuesday afternoon, the only thing many evacuees had eaten all day. Everything in the city was closed, leaving the streets dark and deserted, even of the police.

The government tried to ease widespread fears by sending some workers to damaged areas and promising that the electricity would be restored soon, at least in the areas away from the epicenter of the quakes. But Puerto Ricans heard similar pledges after Maria — and some people did not get power back for nearly a year.

“I don’t think Puerto Rico is ready for more devastation,” said Yesenia Ramos, 53, who lives in a two-story wooden house in Ponce. “And this looked the same as when Maria hit.”

Some homes still have faded and frayed blue tarps covering their roofs, never fixed after the storm. The federal government has yet to disburse all of the aid promised after Maria.

The roof of a middle school in the hard-hit town of Guánica, west of Ponce, collapsed, prompting worries about the vulnerable state of older buildings. Officials were unable to say on Tuesday if the schools, where classes have been canceled until at least Monday, had been constructed to withstand seismic activity.

At least one person was killed and seven schools damaged, said Gov. Wanda Vázquez, who declared a state of emergency and activated the National Guard. More than 750 people fled their homes, she said, and 300,000 customers were without water.

The tremors seriously damaged several power plants, and about 93 percent of the island had no power on Tuesday evening. An island that had already seen billions of dollars invested in its electric grid once again found itself in a familiar place: in the dark and in a panic.

“We are a resilient people,” Ms. Vázquez said. “We have responded to a lot of difficult situations. This has hit us once more.”

There were other eerie similarities to the hurricane. In San Juan, the capital, hopeful travelers crowded the airport, fanning themselves with bits of paper because the airport was running on generator power without air-conditioning. Long lines formed for gas.

At one of them, Nilsa Maymi, 52, said she was trying to stay off her cellphone to save the battery. She was deciding whether to buy fuel for her car or her generator — the same logistical calculation she needed to make two years earlier.

“I am worried that a stronger earthquake will come, and I don’t think we are prepared for something stronger,” said Ms. Maymi, a loan analyst. “I have never experienced this. It’s a bit like reliving the sensation from Maria.”

Electrical service had been returned to about 100,000 customers, José Ortiz, the chief executive of the Puerto Rico Electric Power Authority, said at a news conference late Tuesday. He said they hoped to have everyone’s electricity back within two days.

“We learned from the mistakes of the past,” he said. “We want to do it little by little so that those who get their service back keep their service.”

Damage to the main power plant was severe, Mr. Ortiz said. One employee there was injured by a collapsed wall.

Gov. Andrew M. Cuomo of New York said he was dispatching technical experts from the New York Power Authority to aid in the response. Enduring electrical problems plagued the island after Hurricane Maria in 2017, and Puerto Rico’s former governor, Ricardo A. Rosselló, was assailed because he failed to call in the help of outside power companies.

After spending $3.2 billion, erecting some 52,000 new electrical poles and stringing 6,000 miles of wire from the federal government alone, the Puerto Rico electricity system was left in not-much-better condition than it was before Maria cut power to every home and business on the island. The former Federal Emergency Management Agency official in charge of the process was arrested in September, accused of steering work to one of the contractors with whom she was involved in a romantic relationship.

On Tuesday, FEMA said it was in contact with island officials and was considering the governor’s request for an emergency declaration.

“This is more nerve-racking than Maria because for Maria we were warned, and we were aware of what a hurricane coming through Puerto Rico would be like,” said Harold Rosario, a spokesman for the mayor of Guánica. “But Puerto Rico has never experienced an earthquake this big. You never know when the ground will start shaking again, and if it does you don’t know if it will be a big earthquake or a small one.”

About half of the sirens that are supposed to alert communities to coming emergencies — such as tsunamis — are still not working because insurance companies denied municipalities’ insurance claims, said Carlos Acevedo, Puerto Rico’s emergency management commissioner.

Tuesday’s big quake, the latest in a series of temblors that began in late December, struck at 4:24 a.m. five miles southwest of Tallaboa on Puerto Rico’s southwestern coast, according to the United States Geological Survey. A tsunami watch issued by the local authorities was quickly canceled but led to widespread concern anyway. Strong aftershocks continued throughout the day.

Nelson Martínez Guillén, 73, died in Ponce on Tuesday after a wall fell on him, Mayor Mayita Meléndez said. Ángel Vázquez Torres, the city’s director of emergency management, said nine people had been injured, including a woman who broke a leg after a wall collapsed on her; she was trapped in her home for three hours.

Carlos Correa, the shortstop for the Houston Astros, who is from Ponce, said on social media that he had been jolted awake by the tremor in the middle of the night: “I feel you’re never prepared for something like that.”

In Guayanilla, another coastal town near the quake’s epicenter, the Immaculate Conception church partly collapsed. The church had withstood a huge quake in 1918 with some damage, the Rev. Melvin Díaz Aponte said. This time, both bell towers crumbled. The last Mass held on Monday took place in the outdoor courtyard because Monday’s quake made people nervous to be inside. On Tuesday, the courtyard was full of debris.

“We will rebuild,” Father Díaz reassured a member of his congregation.

Richard S. Olson, director of the Extreme Events Institute at Florida International University, said Puerto Ricans were likely grappling with an immediate sense of grief, as well as the constant reminder that sudden events can cause major shifts in their lives.

That sense of helplessness is exacerbated when there is little faith that government officials are getting infrastructure ready for quakes and storms, he said.

“To be blunt, all of these event losses are human-made,” he said. “I never use the term ‘natural disasters.’ That makes nature to blame.”

Yarimar Bonilla, a political anthropologist at Hunter College in New York, was in Fajardo on Puerto Rico’s eastern coast when the quake hit. She said people were particularly frazzled because of contradictory messages from the authorities about whether they were supposed to huddle under a table or seek higher ground. People were miffed by politicians who used the tremors as campaign opportunities, she said, even as it was increasingly unclear whether emergency management plans were in place.

Marcos Pagán, 31, of Lajas, watched the quake from the seashore, where he operates a water taxi.

“It felt horrible,” he said. “I thought it was the end of the world.” 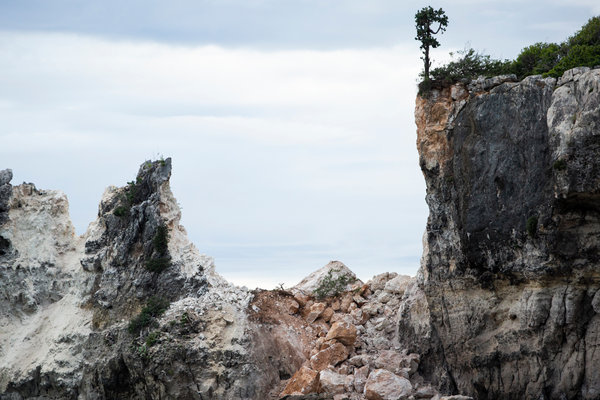 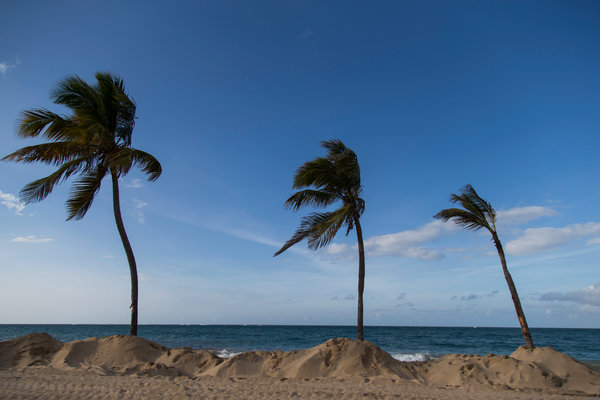 Patricia Mazzei is the Miami bureau chief, covering Florida and Puerto Rico. Before joining The Times, she was the political writer for The Miami Herald. She was born and raised in Venezuela, and is bilingual in Spanish. @PatriciaMazzei

Frances Robles is a national and foreign correspondent based in Miami. Before joining The Times in 2013, she worked at the Miami Herald, where she covered Cuba and was based in both Nicaragua and Colombia. @FrancesRobles

A version of this article appears in print on Jan. 8, 2020, Section A, Page 1 of the New York edition with the headline: Temblors Jolt Puerto Ricans Torn by Storm.