Posted on May 27, 2020 by puertoriconewcomer

SAN JUAN, Puerto Rico (AP) – Puerto Rico officials announced Wednesday that they are closing more than 30 public school cafeterias and several food warehouses after dozens of workers tested positive for the new coronavirus – a blow for students who activists say are often going hungry during the pandemic lockdown.

Education Secretary Eligio Hernández said the temporary closures come after 50 employees tested positive and another 278 were placed under quarantine. The closures hit places including Caguas and Mayaguez, two of the largest cities in a U.S. territory where nearly 70% of public school students are poor.

“Under no circumstance do we want employees, municipal workers who are helping us and, least of all, our children, to catch this virus,” he said.

Several mothers and nonprofit organizations have sued the island’s Department of Education, accusing it of dodging its responsibility to feed the island´s nearly 300,000 public schoolchildren. A judge was expected to rule in the case on Friday.

Education officials initially refused to open the department´s 854 school cafeterias during the lockdown that began in mid-March, citing health concerns, noting that 64% of workers are elderly. Instead, they offloaded the food to nonprofits and a food bank, but it soon ran out.

Two weeks ago, officials abruptly changed their stance and have since reopened more than 100 school cafeterias, but crews are distributing only one meal instead of the two that were previously served, and activists say the food is not reaching all those in need. 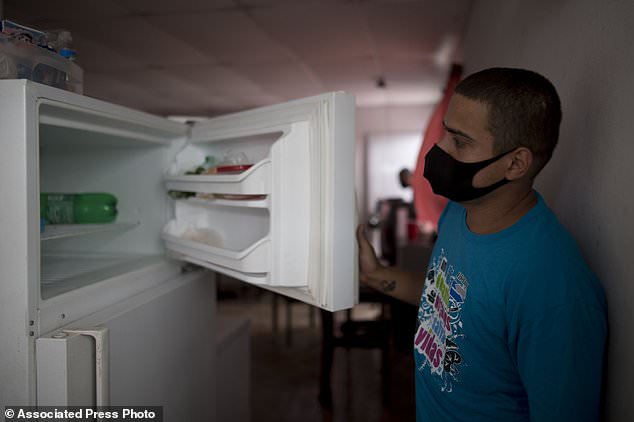 Angel Ruiz shows his empty freezer at his home where he and his wife Ivelisse Rios are having a hard time feeding their two children while schools, and their cafeterias, are closed to help contain the spread of the new coronavirus in San Juan, Puerto Rico, Wednesday, April 29, 2020. The local Department of Education has offloaded food to nonprofit organizations and a food bank to distribute to children, but activists, teachers and a federally appointed control board say it’s not enough and it’s not reaching those most in need. (AP Photo/Carlos Giusti)

Teacher Joalice Santiago, who has been buying food for her students with her own money, said in a phone interview that dozens of families have not been able to receive urgently needed food because the government did not open any school cafeterias near where they live.

“The majority of them don´t have a car,” she said, adding that she and a local pastor recently distributed food at her shuttered school to 60 impoverished families, many of whom are unemployed as a result of the pandemic.

Hernández, the education secretary, said his department is evaluating short-term alternatives to make up for the closures of the warehouses and school cafeterias.

Puerto Rico has reported more than 2,300 confirmed coronavirus cases and at least 115 deaths.