Unemployed Puerto Ricans fume as claims pile up in pandemic. Meanwhile, government workers continue receiving their full salaries, even if they aren’t working

Posted on May 27, 2020 by puertoriconewcomer

While most businesses were forced to shut down, the governor said all government workers would continue to be paid their full salaries, even if they didn’t report to work.  Where is the shared sacrifice?  Why should government employees continue getting paid when non-government employees are banned from working?  Is that fair or a good business practice?

Unemployed Puerto Ricans fume as claims pile up in pandemic

The U.S. territory’s government said it has processed only about 3,000 of of 87,000 requests it has received since the online application platform launched on April 28, and officials have feuded with a technology provider about who is to blame for the delays.

Among those who have tried to apply multiple times online and via phone but received no answer is Olga Cortés, who owns kiosks offering cellphone service and maintenance.

“This is incredibly frustrating,” she said. “I don´t understand how someone has not made the platform work like it´s supposed to in all this time. We´re in the middle of a crisis. We are people who fulfill all our obligations with the government. Now we need them.”

“The high volume of cases and inquiries we receive daily has caused a delay in addressing these claims and processing payments,” she said Sunday. 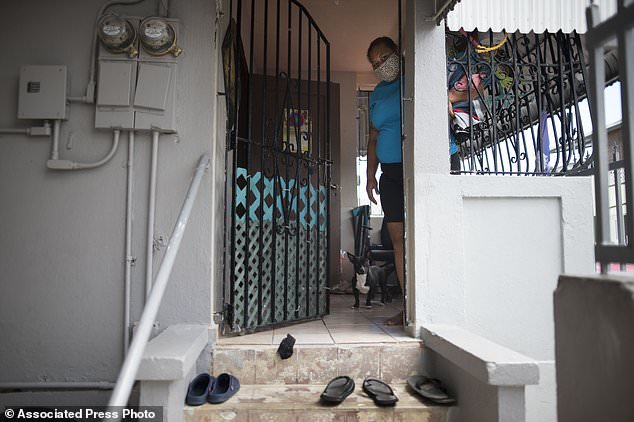 Delia Vicente, an unemployed mother of two boys whose husband is hospitalized with a bacterial infection and unable to work as a debris collector, peeks out of the doorway of her house, where she and her family remove their shoes before entering, during the Covid-19 pandemic, in San Juan, Puerto Rico, Wednesday, April 29, 2020. Puerto Rico’s government is refusing to open school cafeterias amid a coronavirus pandemic as a growing number of unemployed parents struggle to feed their children. (AP Photo/Carlos Giusti)

Torres said other drive-up centers might open elsewhere on the island in upcoming days.

Labor Department spokesman Christopher Domenech told The Associated Press that a total of $5.3 million has been distributed so far to those seeking pandemic unemployment assistance, with beneficiaries getting $600 a week or more. He said he did not have data on how many people received payments or when the first payment was made.

Tech difficulties also have affected thousands of people who rely on a federal nutritional assistance program and reported their card was declined, forcing some to abandon their groceries because they were unable to pay for them. Evertec, the same company overseeing the online platform for unemployment assistance, said it was hit with a high volume of transactions and is working to fix the issue.

The lockdown has hit especially hard in Puerto Rico, whose economy is still reeling from Hurricanes Irma and Maria and a recent string of strong earthquakes, as well as a debt crisis that led the island to declare a sort of bankruptcy. Economists have warned the unemployment rate could reach more than 30% on the island of 3.2 million people that has a more than 40% poverty rate, higher than any U.S. state.